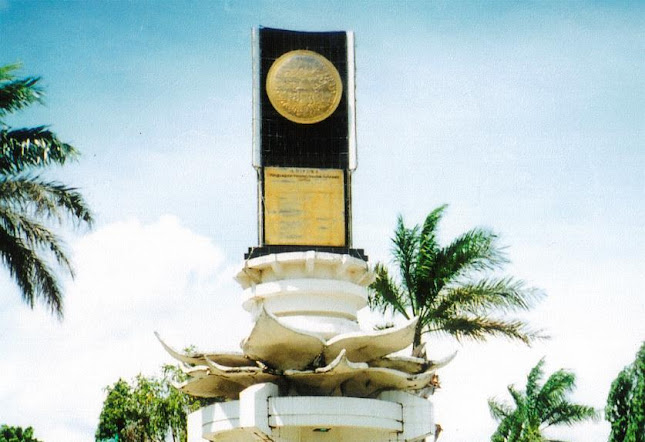 What are things on mind when you hear the word “madura”? Sugary and delicious brochettes? Coto? Jejen rice? People who’s easily get angry like typically coastal inhabitant? Bison (sort of car, public car) drivers who were expert to make a thrill for their passengers? It could be. But Madura isn’t just all that.

First time we set foot on Madura land was on Dr. Soetomo street, Sumenep City. To be more precisely, at Sumenep Palace, Adipura Park and Great Mosque area. After couple minutes took a rest from exhausting trip Kamal-Sumenep, we went to that mosque.

Panembahan Sumolo Mosque, according Moh. Erfandi, a tour guide in area, was built in 1763 by Panembahan Sumolo, the 31st king of Sumenep. This is one of 10 oldest mosques in Indonesia. Physically, it has no different with the common mosques. After all, it has its own charisma because of behind-the-scene story.

King Natakusumo a.k.a. Sumolo called a Chinese architect, special for developing this mosque (in that period, China had the best architecture technique). Building materials were also unique. The adhesive used was not ordinary pure water, but mixed by nira (sap obtained by tapping inflorescences of various palms used to make sugar). As I know, nira at the moment was very hard to get.

From Sumenep Palace Area, we then went to Asta Tinggi and any beach, for the reason that my team had an obligation to take some pictures there. Another team which actually had nothing to do with Asta Tinggi, is forced to go along.

Asta Tinggi is where the kings of Sumenep and their family lie buried. Kings like Pulang Jiwo, Wiro Sari, Prince Anggadipa and Prince Rana was placed in north Kuba (a domed resting place). Meanwhile south one is settled by Prince Jimat and his brothers. These cemeteries looked so grandiose because of its history. Though, the architecture in my opinion is not so special.

Almost 16 o’clock when we arrived. We came in one nippy visit. Since the Bison crew we’ve been hiring did not accept any compromise. Ten minutes wasn’t ideal at all to snap a big object. But okay, let’s see what we can do.

Rocky and I were then interviewing a caretaker in that graveyard. We’ve got straight information like kings’ genealogy, map of cemetery, and closed by an appeal, “If you’d like to alms, please my brothers, on box over there. As your whole heart. If you don’t, it’s fine. As your whole heart.” Yeah, finally I put into a sheet of ‘whole heart’.

Ellia was luckier. He got more remarkable information that around Asta Tinggi quarter there was a cave. When nobody in team was willing to followed up what Ellia said, Ellia himself and I moved out to the cave.

Step down path there was not comfortable. But once we entered, aesthetic ambiance soon greeted us. This small cave has few levels by nature, as there is lower and upper ground, similar to a mall. Stunning, although a bit spooky.

I, didn’t know as for Ellia, desired to explore no matter how deep is the cave, took advantage while it was still bright. Remember, it’s located near cemetery complex. But anyway, we just took pictures twice or so when my cellular phone sang. Mr. Igak as our coordinator gave us notice that damn Bison was ready to go that time. Ok. I thought that exploration should be finished. Thanks to that God damn drivers.

On the way to basecamp at Pamekasan, in accordance with our agreement, Bison stopped next to a beach, which was stony, not sandy. We quite enjoyed with the sight, particularly at the offshore. Mia broached an idea to rent a motorboat and leave the land. That was good idea, we all agree with her. Then I searched fisherman with such service. I met one.

The boat came. Only my team, six student, who wanted to get ride, which I didn’t know why. Rocky took initiative to doing interview with him. The fisherman’s name is Anas. If his boat was not in rent like this, this thirty something man search the crabs for business.

Sun shone orangely. We smelled perfume of the sea blending with scent of rotten wood. It was peacefully. We were there, in the middle of the sea, until 17 o’clock. Subsequently, Sumenep group returned to Pamekasan, to Novi Herawati (our classmate) sister’s house.

That not-so-big house was basecamp of almost 100 visitors of university. Can you imagine? We felt like sardines! Water is limited in Madura, East Java, with or without the number 100 I just mentioned. Lucky me, I took a bath first. Those who didn’t allot water accusing me. Hahaha, whereas in fact I would accused it too to those who had took a bath before me.

Ellia and Rocky were included as misfortune ones. They had a plan to take a bath in bathroom near by musala (a petite mosque). Brought clean clothes and towels with them. But their faces were getting red for sure after plan didn’t work, folks blocked their way. Apparently, the bathroom, also the musala, was private property.

Rocky and Ellia didn’t even ask any permission. How silly! We laughed out loud while listening their story.

My team after all fled to a hotel, about 200 meter by basecamp. We signed in two rooms. Actually, we had tried one, for paying less. But the owner prevented man and woman assemble in one bedroom, unless we can verify that we are husband and wife.

Tariff per room semi VIP, with two beds, two extra beds, television and fan, is 80,000 IDR (Indonesian Rupiah, 1 USD equal about 9,000 IDR). It was expensive enough for student like us. However, because that was 19 o’clock and we were pretty tired, we took that rooms, before any other team took it. We got Room 203. Whilst, Mia and Arien choosed ordinary room priced 25,000 IDR, without TV, and of course without any extra bed. 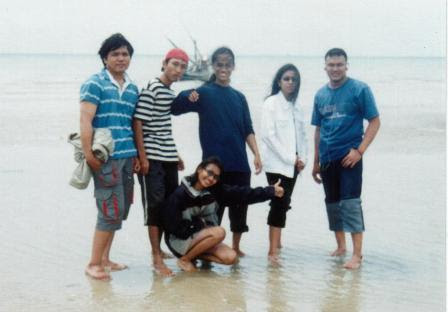 The next day was last day we were at Madura. As the plot we arranged together in the inn’s room, we wished for accomplished our task. Mr. Soetojo, our photography lecturer in Surabaya, had given instruction his undergraduates to take pictures of a model. Who was going to be that model? We’ve decided: Arien.

After consulting to some Bison agent, we came to a decision; that day our destination is Camplong Beach and Api Tak Kunjung Padam (Unflagging Fire).

Pacing our feet to this beach was so nice. It was 10 O’clock. Snapping Arien was success in no doubt. Unfortunately, Api Tak Kunjung Padam was not good. The fire was continuing to blaze, indeed. But people around used it to fry their foodwares.

Nothing could see except the red-hot flames licking up from the ground. We didn’t take photos of it since wasn’t feeling any sense of art there. We’ve just shopped some souvenirs specialty of Madura: Whip, sickle, batik, and so on.

Back to the inn. Everything just run smooth. Except one. Reckless driving style of Madura’s Bison driver. But anyway, this driver and his assistant were not like at Asta Tinggi the day before, they did not protest at all when we were spending more time out of time. Only, as we reached hotel at 12:30, they looked for additional 20,000 IDR.

We checked out at 13 sharp, and waiting for the bus we’ve been hiring. It was relatively on time. That bus picked us up at 14. We said good bye to Novi’s family. We were going home. The atmosphere within the bus wasn’t cheerful anymore. Maybe we all were weary and psychologically satisfied.

16 thoughts on “Snapping Madura: A Brief Note of A Journey”