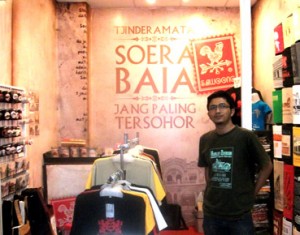 What is the distinctive of Surabaya? In culinary, maybe it’s lontong balap, semanggi, or rujak cingur. In arts, perhaps it’s Ludruk or Remo Dance. In culture, it can be Surabaya’s rude curses, or the determined spirit of Surabaya people like they ever showed when tore off the blue part of Netherlands flag in the year 1945.

But, of course things like those are not portable. You cannot take them as a gift, unless in the form of photos or video.

So as a Surabaya people, sometime, I was confused too. What should I give as a souvenir to a friend outside Surabaya? Moreover, Surabaya does not have yet complete database and online store that sells unique merchandises like Layla Grayce.

However, try to visit Sawoong’s outlets in Cito (City of Tomorrow), JMP (Jembatan Merah Plaza), Royal Plaza, and House of Sampoerna. Or go directly to the workshop at street of Kalijudan III / 2, Surabaya, province of East Java. You will find merchandises such T-shirts, mugs, postcards, bags, key rings, pins, etc. All is in Surabaya heritage theme.

“The noble goal indeed is to participate in the movement named Save the National Heritages,” Kuncarsono Prasetyo, founder of the Sawoong Creative, explained to me.

“If today’s focus of Sawoong is exploring Surabaya, it’s just because I happen to be a Surabaya people. In the future, this local heritage concept will be there too in Medan, Jakarta, Semarang, Malang and Bali. Certainly, it’s still Sawoong brand.”

Sawoong is inspired by a famous legend of Surabaya, Sawunggaling. The word “sawoong” itself in the Javanese means “chicken”. That’s the logo of the creative company which was established in 2007 and officially incorporated in 2009.

In accordance with the theme, Sawoong’s texts also use the spelling and style that was the trend in those years. I noticed that the text often use van Ophuijsen (Dutch-style of Malayan language) spelling and Dutch language. You can see that also on Sawoong’s website. Unique. What an imagination!

“Imagination?” Kuncar, the familiar call of Kuncarsono Prasetyo, objected. “No! I did some research before executing all. Language, font, image, and even any curves ornament of Sawoong designs. I confirm that they all in accordance with current trend at the moment.”

Born in 1977, Kuncar is pretty much familiar with the senior researchers of Surabaya. When the design swerves a bit, they would criticize. For instance, “Kuncar, an arch like this did not exist in that era.”

Kuncar has also been criticized by a French designer who wants to buy Sawoong products, once. He disputed one T-shirt designs depicting the City Hall. “You shouldn’t put the ‘Brief Kaart Soerabaia, Oost Java, Indonesia’ text,” he said. “Because, that building has already has red and white flag, it’s your national flag! Means, Indonesia has already been independent, so should no longer use the Dutch language.”

Criticized so, Kuncar did just nod. Since the beginning, Sawoong emphasizes the power of historical research as a differentiation with other creative industries. Kuncar has a plan to overhaul that design when it’s sold out.

One design is produced no more than 500 pieces. It already includes the S, M, L, XL and XXL sizes, also shirts for men and women. I have noticed, women t-shirts look more sexy because below-the-armpit parts are sunken inside.

The two gender shirt is still divided into the short and long sleeves. So I think that 500 pieces are quite exclusive. Especially after they are sold out, Kuncar does not produce or sell such design anymore. In addition, the designs will be drawn from Sawoong.com catalog.

So, there is new designs all the time, whereas previous designs are always registered legally. Don’t they worry about run out of ideas?

“The heritage theme is wide,” said Kuncar. “As a collector of some communication media of the past centuries, I know, there are still plenty things I haven’t explored. Above all, remember, what we see today will be a heritage in the future. I won’t run out of ideas.”

I agree. If Sawoong heritage theme, I think the potency is still can be developed further and deeper. Imagine these everyday goods: sweaters, jackets, hats, backpacks, blankets, Pom Pom Baby, wall papers, and even furniture with creative heritage designs a la Sawoong.

Looking at Sawoong designs is like to regarding a series of story about a city’s history. Like the reliefs of a temple. Each pieces has a puzzle. [Photo by Brahm]

8 Replies to “Appreciate Heritages in Everyday Goods with Sawoong”