The story of Revival of Queen Leyak (RoQL) is set in Bali, an exotic island where technology, tradition, and supernatural all lurk under the guise of a modern paradise. You’ll be Tetsuo Kobayashi in this visual novel. You’ll stumble upon an ancient curse and must race againts time to hunt for the Queen Leyak’s Necronomicon.

Banyan trees deep in the forest

So, get to that tick jungle! Brace yourself to face the resurrection of Calonarang, the most powerful spiritual being in the Balinese ancient realm!

While you are trying to uncover mysteries, you can build a relationship with girls such as Ida Ayu, Kyoko Nakamura, or Sophia Aelfwine. There are multiple endings you can experience. Hope you aware that every heroine has her own dark past.

Synopsis of Revival of Queen Leyak

Five ancient sheets of papyrus had recently been found deep in the Balinese forest in Indonesia. Local archaeologists concluded that those were the important parts of Queen Leyak’s Necronomicon, an ancient tome of dark magic filled with horrors that were too dangerous to even name.

The United Nations assembled experts from around the world to investigate them, and to search for more pages from the Necronomicon. One of them is Ryuji Kobayashi, a leading historian from Kyoto University. Together with his children, Tetsuo Kobayashi and Ai Kobayashi, they moved to Bali.

Tetsuo didn’t know the reason behind the move, but quickly took to his new home, the Denpasar International High School. There, he met a local student named Ida Ayu who shared his passion for history and traditional culture.

They both agreed to reactivate the Culture Research Club (CRC), an extracurricular at school. But its former chairman, Sophia Aelfwine, didn’t agree. “CRC is dead, and we can’t bring it to live only by three members,” she said.

However, Tetsuo then accidentally discovered his father’s private research notes. He was really surprised. It’s something about Calonarang’s papyrus!

The next day, Tetsuo presented the notes to Ayu and Sophia. That made Sophia change her mind. CRC was then reactivated.

Not only that, the club has even agreed too to hunt for missing pages of the Queen Leyak’s Necronomicon. They had fully support from Mrs. Mei Meilani, their history teacher.

That was when the calamity began for Tetsuo and friends.

Revival of Queen Leyak‘s Behind the Scene 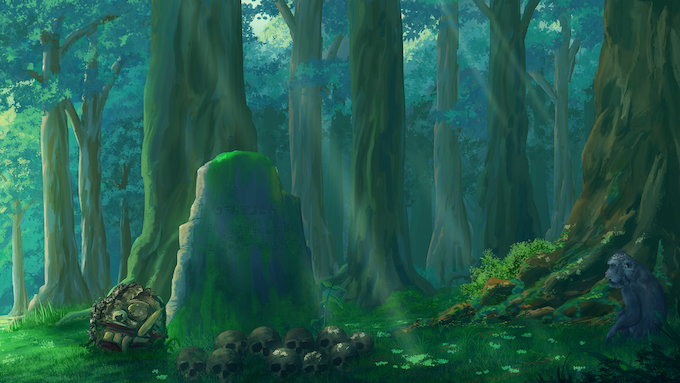 One of backgrounds in “Revival of Queen Leyak” Visual Novel

RoQL is developed by Bunka no Kenkyu (BnK) Team, a bunch of creative persons from Indonesia. As an indie game developer, BnK Team consists of novelist, illustrators, artists, programmer, and music composer, who already have made a name in the field.

Bunka no Kenkyu (Japanese terms mean “Culture Research”) Team cares about Indonesian culture, exotic nature, something thrilling, and something sweet. BnK Team would like to make the story as entertaining as it can for its international audience.

While DEVGRU-P is an independent game publisher and distributor located in the United States. It’s the team behind the success of Panzermadels: Tank Dating Simulator and Stay! Stay! Democratic People’s Republic of Korea game.

During August 12nd to September 2nd, 2016, BnK Team and DEVGRU-P held a campaign to collect funds on KickStarter.com. The target of this crowdfunding was US$ 6,000.

In the meantime, Revival of Queen Leyak alone has been greenlit on Steam Greenlight.

The campaign ended up with US$ 11,213 pledges from 265 backers all around the world. That brought the visual novel to live. With US$ 10,488 (there were $725 dropped pledges), BnK Team decided to extend the game’s plot with Kyoko and Sophia’s routes.

The funding campaign is still on, however, offline and on Patreon.com. The target is to fund the last heroine’s route: Ai Kobayashi.