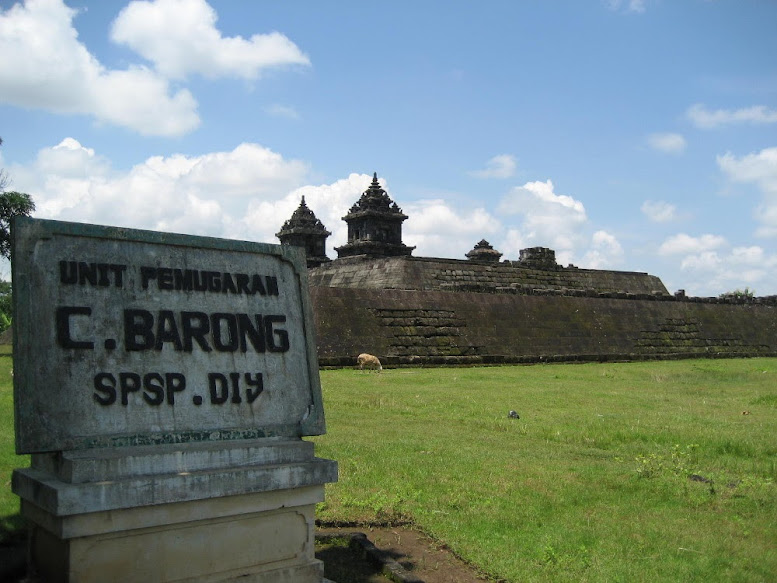 A part of my upcoming novel will set in Barong Temple. I needed to observe two or three things with my own eyes. So I went to the temple. On Google Maps, this Hindu temple seemed easy to find. But in reality, it wasn’t.

The view of teak, mahogany, Indonesian rosewood, and whatnot forests were surrounded us during the trip. My driver drove me through macadam and narrow asphalt roads. If two cars passed by, let alone a bus or a truck, one of them had to pull over. The roads were up and down too, with some sharp windings. It was a bit tiring, even for me who just sat as a passenger.

I have no idea whether my driver wasn’t insightful about local temples or Barong Temple itself was unpopular, but we strayed away from the route, whereas it’s not that complicated. Barong Temple is actually near Ratu Boko Palace, and is still in Prambanan District. 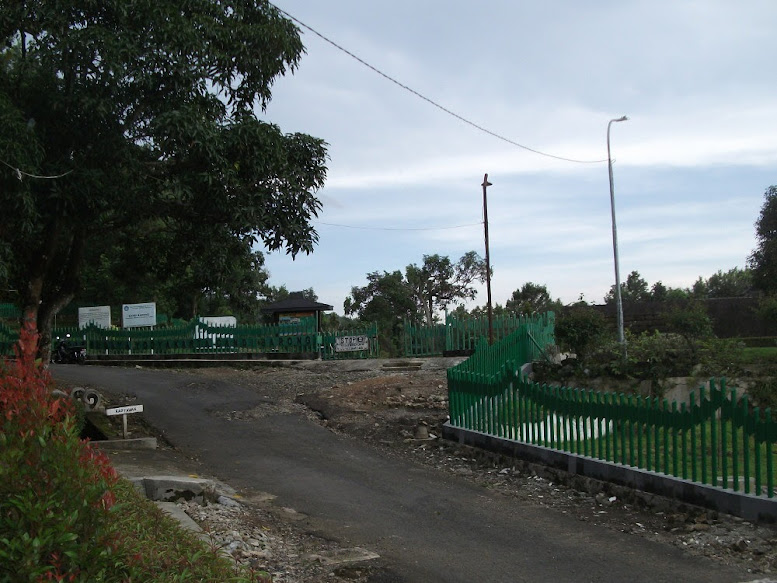 You can take TransJogja bus, if you want to go in cheaper way. Take Line 1A or 1B and drop at Prambanan Bus Stop. It’s almost there, but don’t carry on by food. I suggest you to take an ojek (motorcycle taxi) or taxi. From Prambanan, go straight to the east. After reaching Piyungan Market, turn right or southwards. Just follow the direction signs, then.

Barong Temple was built in the 9th or 10th century. It’s located in Candisari Hamlet, Sambirejo Village, Prambanan District, Sleman Regency, Yogyakarta Province. The temple is a heritage of the Ancient Mataram or Medang Kingdom. From the outside, Barong Temple looks like a solid castle, which you couldn’t enter in any way. I circled it before finally finding the only staircase to enter the temple on the western side.

I stepped in and up. The yard isn’t as wide as Prambanan or Ratu Boko Palace, but it’s spacious enough. I would describe, Barong Temple as a three-step structured temple.

There is no building on the first and second terraces. All I saw was ruins of umpak (base made of stones). 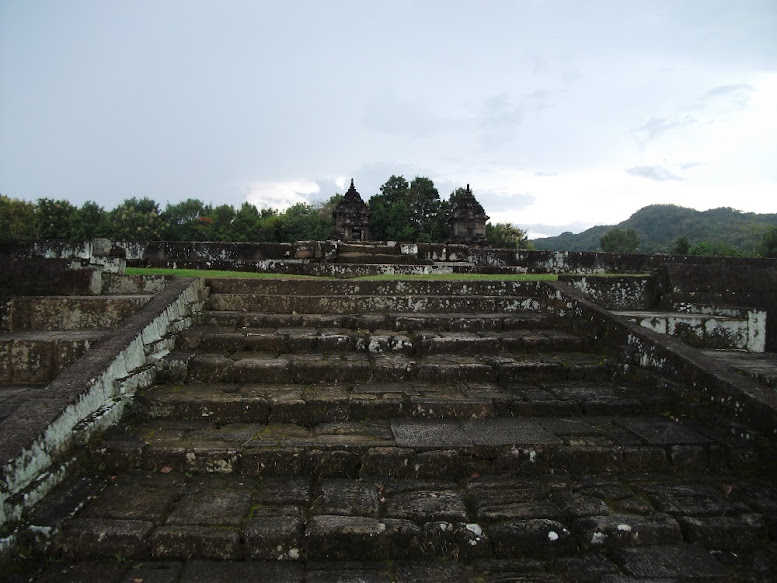 The second terrace is a fairly large open area. There are a number of octagonal objects. It’s expected that they function as the foundation of pendopo (hall). 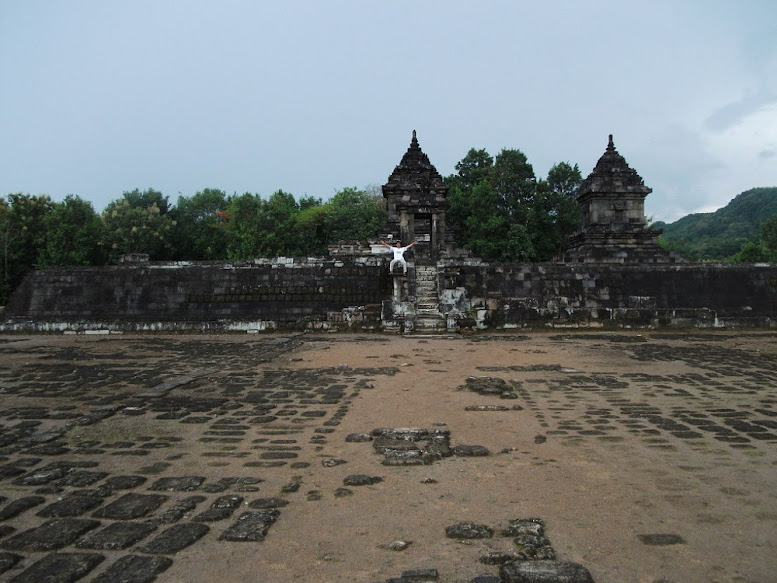 To enter the third terrace, I had to step through a small paduraksa (roofed gate) on the right and left sides of the staircase. This highest terrace considered as the most sacred place of Barong Temple.

There were a pair of temples, or twin temple. Each one is 8.1 meters x 8.18 meters sized and 9.05 meters tall. Both don’t have any door and inner room. Thus, any worshipping ceremony must held on the outer yard. 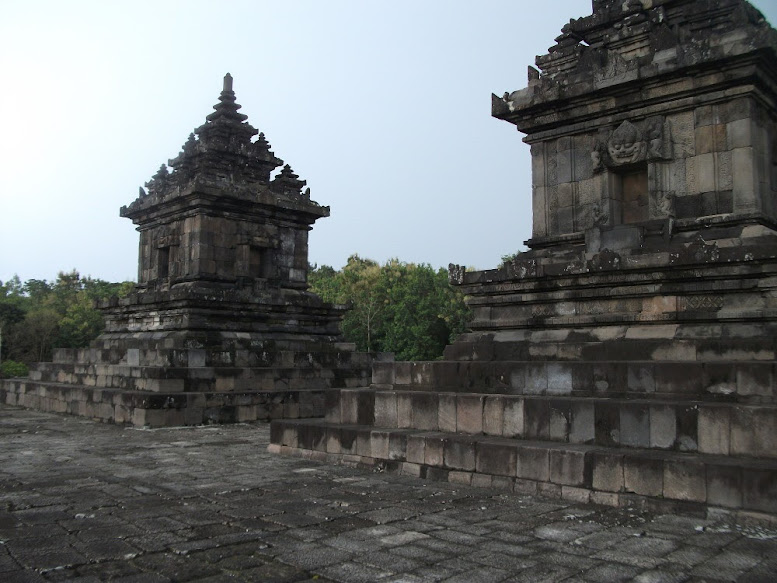 On each niche of these symmetrical temples, you will see ornaments resembling barongan (fanged giants) named Kala (god of time) and Makara (sea creature in Hindu mythology with the heads of elephant, crocodile or deer, and the tails of fish or dragon). This is the reason behind Barong naming.

The decorations are in the forms of winged Ghana and Shanka reliefs. Ghana is a dwarf supporting the temple niches, and Shanka is a symbol of Hindu god Vishnu.

Judging from the statues found, this temple was most likely constructed for worshiping Vishnu (god of preservation) and Sri (goddess of rice and fertility). It’s a bit different from others Hinduism temples in Java that were normally built for worshipping Shiva (god of destroyer and transformer).

Nevertheless, we can still relate Barong Temple Shiva, since I saw the reliefs of Kala (son of Shiva) and Ghana (the servant of Shiva). Plus, I heard that the statue of Ganesha (son of Shiva as well as god of protection and knowledge) was also found there.

Anyway, it’s arguable that Barong Temple embraces syncretism due to its nature of combining beliefs. The worship of Sri is one of those mixed beliefs.

Although some people compared Sri to goddess Laksmi, the partner of Vishnu, Sri is typically Indonesia. To the best of my knowledge, this rice goddess is only worshipped among the Javanese, Sundanese, and Balinese cultures. In the place of origin of Hinduism, India, Sri is not acknowledged.

Another uncommon thing about Barong Temple is its stepped structure with worshipping center at the easternmost part. Just so you know, the temples of Central Java’s Medang Kingdom usually had the main building in the center of the complex.

From that ancient era, only Ijo Temple shares the same characteristic, which is the stepped terraces. This architectural style of temples might originated from Indonesia.

The Restoration of Barong Temple

Firstly discovered in 1913, Barong Temple was only in the forms of scattered ruins. A Dutchman found it by accident when he had intended to expand a sugar cane plantation.

The Government then restored two main temples from 1987 to 1992. It was followed by the restoration of talud (wall supporting the soil) and the fence.

During the restoration, two statues of Vishnu and Sri in the position of sitting with legs crossed were discovered. There were also one statue of Ganesha, two uncompleted statues, and some rectangular peripih (container made of andesite and white stones). 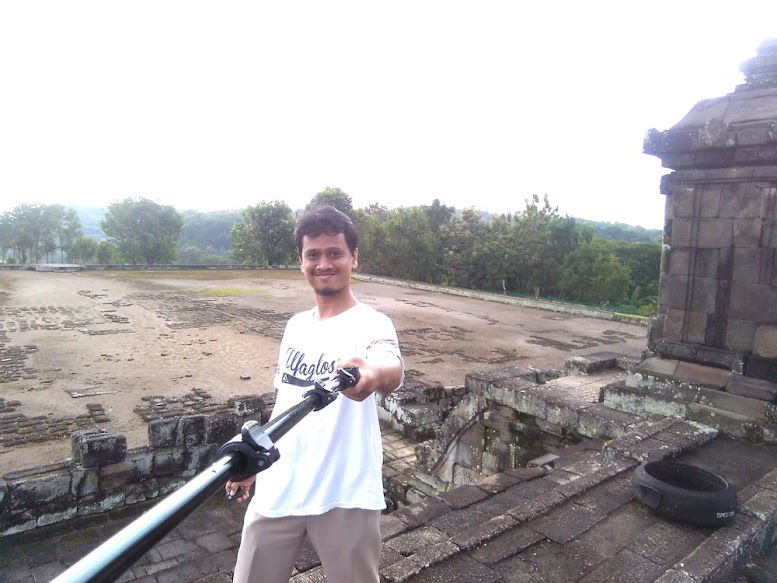 In one of the peripih, there were several silver and gold sheets with some vague text. Meanwhile around the peripih, they found several ceramic bowls, arrow heads, earthenware jugs, and spoons.

Unfortunately, all of the abovementioned have been preserved in the Center for Preservation of Cultural Heritage for the sake of protection. The only things we can see on the tourism site Barong Temple are the twin temples and the regular stones.

Some people say, Barong Temple looks beautiful when the sun sets. It happened that I arrived there in the afternoon. But instead of waiting the sun going down, I raced with the tight duration of observation here. My train was about to depart in few hours. I didn’t have much time.

To make matters worse, it was cloudy and showering too that afternoon! It made my camera lens wet, blurred, and a bit dewy. There was nowhere to take shelter around Barong Temple. I got some sprinkles of rain even under the paduraksa.

In addition to the rainwater, the lightning was also threatening. Located on Batur Agung Hill, Barong Temple stands 199.27 meters above the sea level. This high position and the spacious rocky soil were the reason why I was worried about the lightning.

So, I rushed my work instead of taking shelter. I recorded Barong Temple as much as possible with my camera, smartphone, and brain memory. Until the rain got heavier few minutes later.

I decided to return to the car and leave the site. It means that my visit to Barong Temple only lasted for 15 minutes. This is the quickest visitation I ever made sor for the purpose of conducting a story research.

Fortunately, I entered the temple for free. Imagine if the price was as expensive as the tickets for entering the temple of Borobudur, Prambanan, or Ratu Boko Palace. That would be definitely a waste!

According to my driver, there are two more temples around the block. Those are Dawangsari and Sumberwatu Temple. Dawangsari Temple is only in 100 meters from Barong Temple. “But the temple is apparently only in the form of ruins. Many of its parts have lost,” he explained.

More interestingly, Dawangsari is a Buddhist temple. Two different temples of different faiths, yet from the same era, exists in one complex. Doesn’t it signify that the inter-religious tolerance during this time was praiseworthy? Like it or not, in some cases, we need to learn things from our ancestor.

“Barong Temple is also near to Breksi,” said my driver. Tebing Breksi or Breksi Cliff is an instagrammable park, formerly a mine. “Would you like to stop by?”

I would like to. But since it’s not a part of my story research, plus I was tied by the train schedule, my answer was, “Maybe next time.”

– All photos by Brahmanto Anindito, except the first one (by Masgatotkaca)