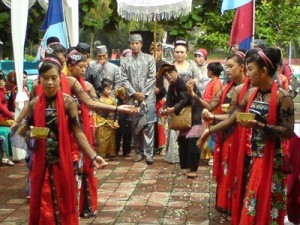 As other conventional culture, the marriage is getting simplified day to day. My aunt was married in 1995, when I was in elementary school. Yet I remember the detail of the procession. And when I attended my cousin’s marriage two years ago, I found many differences in Sundanese marriage.

Here some of them:

My Cousin’s Marriage: When the bridegroom and his family arrived in front of the bride’s house, there were no dancers welcomed them.

My Cousin’s Marriage: The bride came out of her room just when she and the bridegroom would do the marriage promise.

My Cousin’s Marriage: After sungkeman and receiving congratulations from the families, the bride and the bridegroom, and also their parents, prepared to do reception.

See, my cousin’s marriage is far simpler than my aunt’s. More minimalist.

I, myself, agree with my cousin’s version, because do some rites could take a lot of time and energy, which is not necessary. I do not mean to leave my own culture. But in the modern life, we have to prioritize things, don’t we?

However, there are few people who do not want to miss any. Well, it is just a choice.