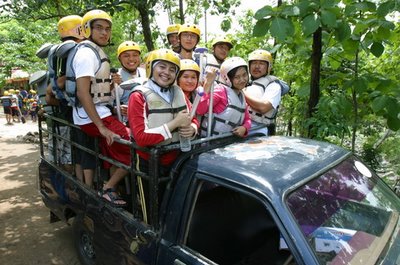 It seems like we have been planning this since centuries. Whirled by the works, we decided to go to Probolinggo to chill out our heads with Pekalen River‘s pounding water. It’s a rafting, Dude! The team, made of 14 persons, went from Surabaya at 6 o’clock in the morning. We reached up Probolinggo about four hours later. The receptionist at Songa Rafting’s basecamp then gave us a welcome smile.

We were split up in three groups, with one boat and two guides (as key controller of the boat) each. After a little bla-bla-bla, at 11 o’clock we went to rafting start location by Songa’s open tank Chevrolet Pickup. The tank had modified so it be a roofless cage. Cool! Unfortunately, due to 14 people there, we had to stand all trip long. Thanks God it was only half an hour.

We stopped at a village’s T-intersection, which I don’t know the name. Our car had no chance to through pass there, so we had to go on by walking. So, after talked the talk, we had to walk the walk. It’s been long time since I had not walked on pretty long distance.

Fifteen minutes later, we arrived. I was really relieved for that moment.

I could hardly wait to get my feet on the water. But, damn! Pekalen’s water was muddy brown. Because of yesterday rain, I guessed. However, that pounding water was still tempting. I heard it says, “Com’ere, boy, got sumthin for ya!”

One of our guides gave us a short briefing. It’s about how to swim if we fall down to the water, how to lift up a buddy’s body to the boat, et cetera. And then we prayed together just before this crossing-the-cascades-activity has begun.

Finally, my boat got going. The two others were behind.

I have just known that every cascade had a name. First one is “Welcome Cascade”. I had thought it would be bloodcurdling. Moreover, the guide had told me that the water’s debit of Pekalen at the moment is higher than ordinary days. I was a bit worried.

However, once we passed-through forth cascade, it became rock! We did not feel that we have been ridden on Pekalen for an hour already. It just rocks! So when the boat moved aside for repose, I was so disappointed.

Happily, “We are half way yet,” my guide said.

In that repose post, they served us with jemblem (a snack made of cassava with palm sugar within), and natural coconut as beverage. We devoured them all in no time! Ha-ha. Rowing is definitely exhausting!

Fifteen minutes of repose was up. The journey must be continued. Hey ho, let’s go!

For that time, three boats went at once. More fun, more laugh. We splash each other whenever our boats were close enough. Nah, that’s ridiculous. And childish. And, brrrr, that’s cold!

We touched the finish line. Damn it. The party was officially over.

At 14 o’clock, the group headed back to the hotel. Tomorrow, we would go to Mount Bromo. God, I think I’m gonna rafting again sometime, somewhere.

For you who expect more challenge, I think raft on rivers whose higher difficulty level is a good idea. Or, raft in nighttime, where even with a flash and stick light you cannot anticipate any cascade. More adrenaline will be involved. Anyone?