Many stunts, role plays, and spectacles were displayed in front of public, the representatives of the friendly countries, and the President of the Republic of Indonesia. TNI uses this celebration also to show off the new equipment and weapons.

From the Army, for example, we saw Leopard 2A4 main battle tank. The Leopard is made in Germany. Its weight is about 54 tons. The tank features digital fire control systems with laser rangefinders, a fully stabilized main gun and coaxial machine gun, not to mention the advanced night vision and sighting equipment. The Leopard has the ability to engage moving targets while moving over rough terrain. 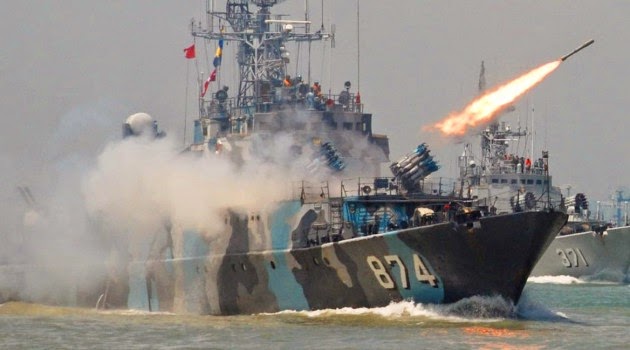 Missiles launch from the Naval warship

From the Navy, there are the Fast Patrol Ship, the Fast Missile Ship, and the Kilo Submarine. The Kilo is a naval diesel-electric submarine, developed by Russia. The submarine is mainly intended for anti-shipping and anti-submarine operations in relatively shallow waters.

From the Air Force, there is a drone called Wulung. The Wulung drone provides real-time recording to ground control stations. Unfortunately, it can only fly for six hours and 73 kilometers far. But this is a “homemade”. So, it’s not about the advance technology, let alone to be compared with American drones, which can launch the missiles (UCAV or Unmanned Combat Aerial Vehicle). It’s about the beginning of national drone production with the very own resources.

There were also Sukhoi SU-35, T-50i, Super Tucano and newest F16 in the sky. Also the latest Apache and Black Hawk helicopters. Made by Boeing, United States of America, The Apache gunships are primarily designed to attack other gunships, slow low-flying aircraft, and ground attack and anti-tank strikes.

That’s all I can remember. I am sure I missed some things 🙂 There are many more of TNI’s newest (upgraded less than a year ago) main equipment and weapon systems.

But what we should underline here is, obviously, within 10 years under President Susilo Bambang Yudhoyono (who’s ex military), TNI has seriously started to build up its strength to reach the Minimum Essential Force or MEF. The question is, will the next Mr. President, i.e. Joko Widodo (who’s a civilian), continue this?