Some said, Kawah Putih is a spilled paradise. So I browsed about it. Based on what I saw on the Net, I could not disagree with that statement. According to Perhutani (Indonesian state-owned forestry firm who handles this site), there have been up to 10,000 people visiting Kawah Putih on peak season. OK, I decided that I was going to travel there to see it myself. 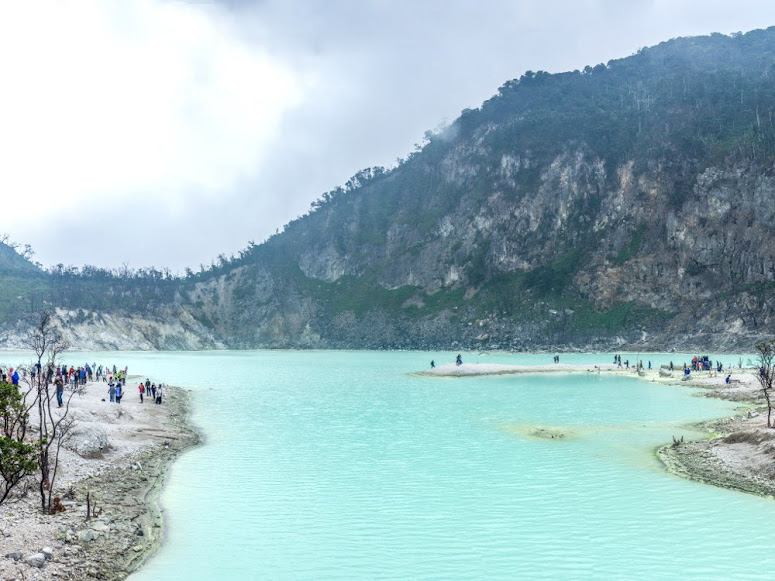 Kawah Putih (it means White Crater) is located in southern Bandung, Ciwidey, West Java. It’s about 46 kilometers southern from the city. I, accompanied by Rie and Eka, depart from Cicalengka. At 1 p.m., we arrived at Ciwidey Terminal. And continued by a public transportation.

Drama with a Local Driver

The rain then fell. Not heavy one, but it was quite worrying. Ciwidey is a highland. A little rain would easily create some fog blanket. When I looked through the vehicle’s window, I saw the view was already blurred. I even couldn’t distinguish the chasms down there. Though, the driver drove his car as fast as usual, without worries. Perhaps, he accustomed to this kind of situation.

The driver then offered us to drive up into the crater in direct.

The driver spitted it out. Of course we, plus two other passengers (who seemed to be newly married couples), bargained that numbers. Actually, the couple wanted to go to Cimanggu, but we successfully provoked them to shift the direction to Kawah Putih.

Unfortunately, after we all agreed that it cost IDR 30,000 per person, those passengers were out. Probably it was away from their budget. By that, Mr. Driver raised the fare. “I will lose for gasoline if I drove only three passengers,” he reasoned, and offered 50 grand per person, for the same route.

It makes sense. Initially, we agreed. But I really lost my mood when at near of Kawah Putih, he told us, “Now, please prepare the money for four heads and a car tickets.”

In front of Kawah Putih’s gate, we went down. We gave the driver IDR 24,000 for three persons. From there, we walked! Eka said that gateway and crater is pretty close, so, “We can walk.”

However, the ticket seller corrected it, “It’s far. About five kilometers from here.”

That’s why the operating manager provides special transports to the crater. It’s called ontang-anting (it’s sundanese means “back and forth”). The price was IDR 10,000 round-trip. Plus ticket, it was IDR 26,000 per head. Compare with the number offered earlier by the brash driver, yet I had to pay him and his car! 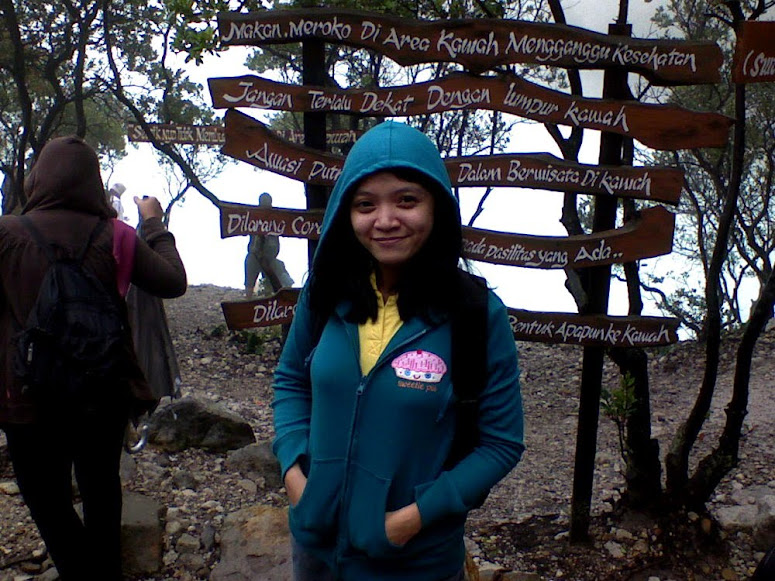 Kawah Putih is a lake stands on the summit of 2,386 meters high mountain, Patuha, West Java Province. The coordinate is 7.10° S 107.24° E. All along the road has been asphalted. But it is long, uphill, and winding. When would we be there if we had decided to walk?

After our ontang-anting stopped in parking lot, we still had to descend to enter the crater. I saw the high walls of the crater on the top of Mount Patuha. The white sand and gravels sulfur-containing lay gorgeously. You can smell the sulfur’s strong aroma. You can even see the sulfurous gas bubbling from the lake. 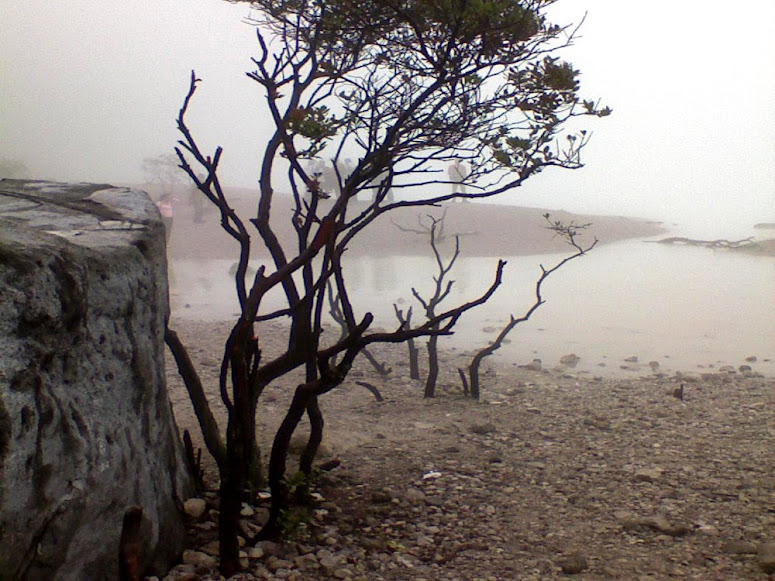 When the wind blew (and it did quite often), it could be so stinging and made me cough often. My hair was also limp by the sulfur’s dusts.

It was cold up here! Kawah Putih’s temperature is 8-22 degrees Celsius. No wonder, it’s highland and the surrounding is a dense forest. 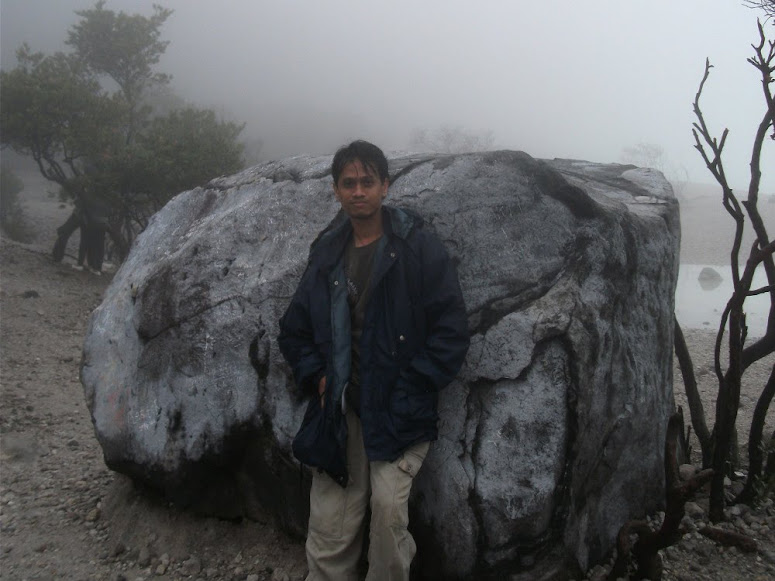 But on the crater area, there are mostly dried trees. With some huge rocks, made me guess that this must be some kind of megalith or something. Some says, you can also find Javanese Edelweiss, Cantigy (Vaccinium varingifolium), et cetera. You might spotted eagles, owls, monkeys, mouse deer, and forest pigs as well.

Sadly, the weather was rather bad. Drizzle was reluctant to quit. The fog made everything unclear. 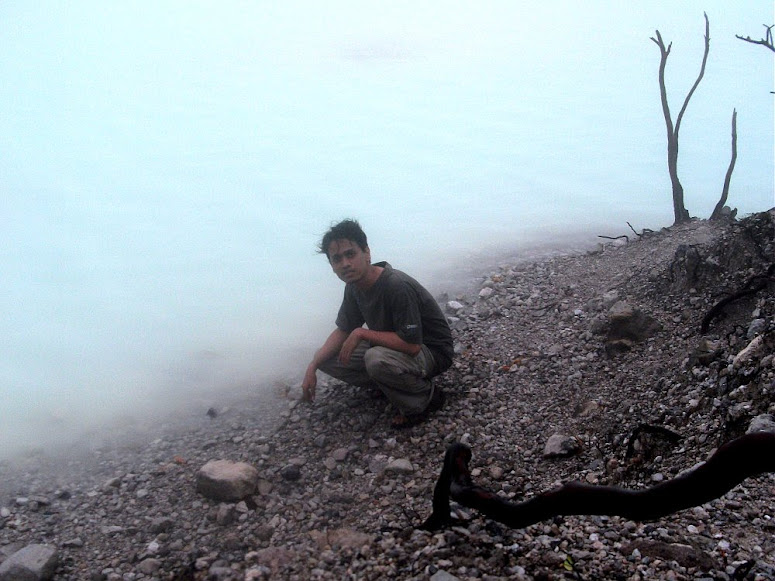 Yet I could see, there were two large lakes, about 600 meters in diameter. People say the water color can change depending on the sunlight. Sometimes green, blue, or brown like that moment. But the water is always warm, because Mount Patuha is a volcano and is still active. 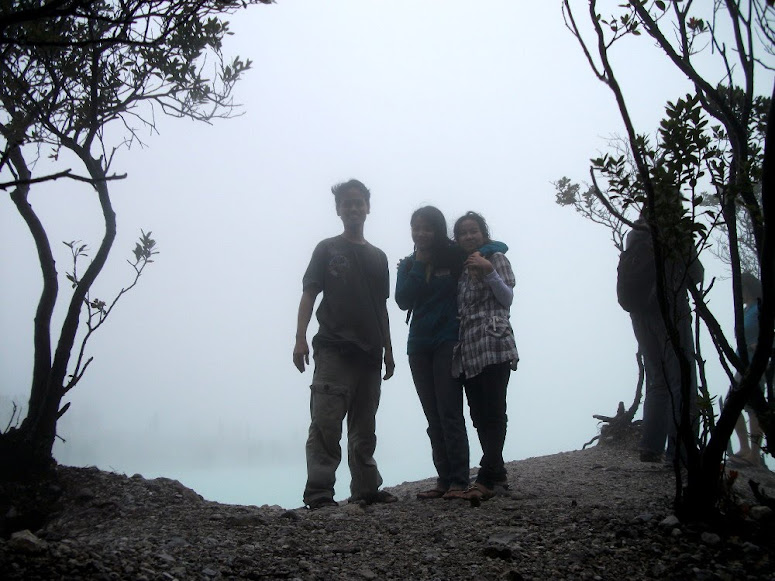 Visually, I think Kawah Putih is a spilled heaven indeed. Only, I suggest you to get thick cloths ready before going there. And a mask for you to avoid inhaling the sulfur’s dust too often. To avoid blurry pictures like mine, try to come here during dry season.