“In Indonesia, the east side sparkles brighter.” When my sister told me that, I did not buy it. Not at all! I needed more than five years to see it with my own eyes. That was when I visited Masohi, Ambon, Maluku Province, to take a break from a while from writing activities.

I took flight from Surabaya and transit in Makassar, South Sulawesi. It took 1.5 hours. So did the flight from Makassar to Ambon.

My sister-in-law, my host, had waited us by the time we arrived at the Pattimura Airport in Ambon. She lives in Masohi City. We needed about two hours car trip from the airport to the harbor. Then the journey continued by a ferry. Actually, we can also take fast ship, but there would be no room for the car. So, we just chose the slow ferry.

Then, we carried on land trip for three hours around the Seram Island. Its view really saved us from the boredom. Along the island, I saw a mountain in my left and the sea in my right.

For your information, Masohi is a coastal town on Seram Island. It is the capital of the Central Maluku Regency. It was historically the site of a detention camp for political prisoners in the 1970s. Masohi City had 36,433 inhabitants at the 2020 Census, according to Wikipedia.

It is a small city, indeed. On main streets, I saw houses, schools and small shops, some typical sights in Indonesia. Wild dogs, goats, and cows were also everywhere. I think there were more of them than trucks and the motorcycles.

Masohi City is quiet busy. There is no mall, though. The most prestigious shopping center here is the Binaya Market, a traditional market that sells daily needs, such as vegetables, fruits, foods, beverages, shoes, clothes, accessories, cellphones, talk time vouchers, et cetera. The funny thing is, if we buy eggs here, we don’t buy per kilograms, but per egg. Then to buy chilis, we buy it per bundle. I mean, don’t they have a scale? 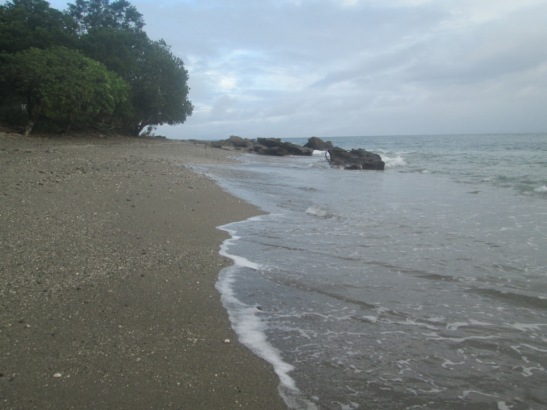 Masohi has at least three popular beaches: Rutah, Kuako, and Natsepa. Kuako Beach can be reached 20 minutes from my sister’s house. Because we came during weekdays, this beach was deserted. Wonderful. I felt like playing in my private beach.

Unfortunately, the waves were high. Those discouraged me to go further to the sea. According to the local people, from June to August, the waves and the rainfall are always dangerous. Not to mention that the water was a bit muddy. I prefer Natsepa Beach in Ambon. Natsepa is the most gorgeous beach I have ever seen.

My sister brought us a special culinary. It is called ikan asar or smoked tuna. We ate it with ketupat santan (ketupat cooked with coconut milk) and pickles salad (mix of bamboo shoot, legumes and cucumber, with the sauce made from peanut, turmeric, vinegar and salt).

Don’t ask me the taste. Since I was born, I never liked any fishes nor vegetables. But this! I just could not stop eating this.

My sister-in-law brought me to a hill where the Masohi letters stands like the Hollywood letter in California Hill. From up here, I could see view of the sea and the mountain at once. It made me harder to decide when to go home.

There is Sombahyang Hill where the Christians could pray. And about 50 meters away, there is a unique, yet simple temple for the Hindus.

Again, I was served with special culinary of Masohi. This time papeda bumbu kuning (yellow dressing papeda). Papeda is a culinary from East Indonesia made from sagu flour cooked with water, salt, and sugar. The dressing was fresh, but since I was not a fan of fish, I just ate papeda and the dressing. It was quiet delicious!

The next dish was roasted fish with colo-colo sauce (mix of union, tomatoes with the shape like small squash, chili slices, oil, water, and soy sauce) that tasted sour, hot, and sweet. So freshy! Not like other fish meals in Indonesia that are eaten with rice, this roasted fish is eaten with boiled cassava. The cassava is well-cooked and soft, so I really enjoyed eating it.

Another menu is sup sodara (brother soup). It contains meat with the dressing like coto makassar, but clearer, fresher, and softer.

Which one is delicious? Well, I love them all!

Time to Back to Ambon

We went home on Saturday morning at 6.00 WIT (Eastern Indonesia Time). From Masohi to Ambon, still, we had to circle the beautiful Seram Island. Because we left early in the morning, the view was more beautiful.

I could see a silhouette of the mountains through the Seram Island’s thick clouds. After that, the misty covered a half area of the mountains. Holy God, it was even more wonderful! It looks like an ancient Chinese painting.

Getting through land trip for three hours, we finally arrived at the harbor. We crossed again by the ferry for 1.5 hours. We decided then to have a breakfast first in Amplas (Ambon Plaza) area. There, while my mother and my aunt hunted for souvenirs, I took a walk around the shops and The Great Mosque of Ambon.

It was the most wonderful trip I have ever done so far. And I really want to come back to Maluku one day.

4 thoughts on “Masohi: The Beauty of Maluku”