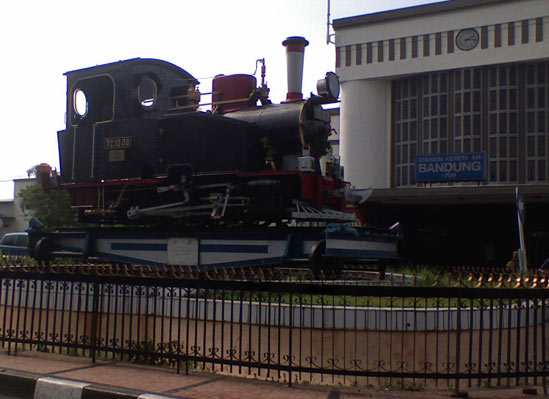 Inside the train, many passengers had taken their own seat at Haurpugur Station (a small station before Cicalengka). So I had to stand up that day. Fortunately, there was always kind person who offered me his seat. Maybe it’s because I’m a woman. So I could sit, thanks to that universal gentlemanliness.

Oh, I forgot to mention two types of seat in economy class. First type sticks along the wall of the train. Thus the passengers turn the back on the window. By sitting this way, you can see all kind of passenger’s activities: reading, chatting, watching other people like I always do.

Second type, the seat that is face to face like in the executive class train. Here you still see, hear and smell the noisy merchants. But at least you can enjoy the panorama outside. I always noticed, there is green rice field on the side way to Bandung. In harvest time, the field becomes beautifully gold. Also the farmers harvesting. The hill, the mountain as a background. And the air! Just open the window and inhale deeply. So refreshing.

Just like its name, “patas” (cepat-terbatas) is fast and limited. It takes less than an hour to reach Bandung from Cicalengka, and vice versa. The ticket is more expensive. But surely it’s more comfortable. There is no such merchant or beggar in patas train. Only “Reska” (Restoran Kereta Api): two men who officially sell bread, soft drink, and instant noodles.

Since 2009, there has been a new kind of patas train: Baraya Geulis and Rencang Geulis (in Sundanese, baraya means family, rencang means friend, geulis means beautiful). They stop at four stations only: Cicalengka, Rancaekek, Bandung, and Padalarang. The ticket for Bandung-Cicalengka costs 5,000 IDR, and for Cicalengka-Padalarang 8,000 IDR. The seat sticks along the wall and there are hooks on the ceiling for standing passengers.

At Rancaekek Station, a lot of passengers descended. How releasing. Since then, I could sleep whenever I wanted and got tired. While the train kept on working hard. Everyday. Almost non stop. Regardless its tiredness. [photo by Rie]

25 thoughts on “In Cicalengka-Bandung Train”