PT PP Properti, Tbk., a rising name in the property industry, is campaigning its new and ambitious Grand Shamaya, a luxurious apartment project right in the heart of Surabaya’s business district. The concept is a resort, so you’ll see parks, the eight-floor high waterfalls, bird corners, and much more inside Grand Shamaya.

As the campaign got going, the contractor trusted Warung Fiksi to build their annual book. This year, they wanted it produced in both Indonesian and English, in full color, and with the visual style of modern books.

That meant they were asking for a solid team of writers, translator, editor, photographers, and designers. We were more than happy and proud to answer that call.

We started by sitting together, listening carefully to what they wanted for the book, and setting some schedules.

A few hours later, we had the opportunity to visit site where the five towers of the apartment will be built.

On Tuesday, as scheduled, our photographers brought all their gear to conduct a photo session at the site, as well as at the office. We also operated a drone for the outdoor photography.

In the meantime, the writers interviewed some key people. The existing brochures, website, presentations, reports from Grand Shamaya’s consultants, and publications in the media weren’t going to be enough – we needed to go deeper.

We interviewed and asked for some data from Grand Shamaya’s Senior Marketing Communications staff, Project Director, Legal Affairs staff, architect, and Financial Manager. It wasn’t hard job at all, since they were so helpful and cooperative.

Meanwhile, the designers started their task to create the cover, tables, diagrams, and graphics.

Once the writing was done and approved by the client, we sent it to our Indonesian-English translator. Then, we passed it to our English native-tongue editor. We shared the results with the client. Some revisions had to be made before the text was ready.

It was now time to lay out the book. This, unexpectedly, consumed the most time. However, it was finally finished without too much trouble.

So, since the kick-off meeting, we needed less than two months to make the corporate book ready for final review and printing. It’s 286 pages in A4 size.

The story of Revival of Queen Leyak (RoQL) is set in Bali, an exotic island where technology, tradition, and supernatural all lurk under the guise of a modern paradise. You’ll be Tetsuo Kobayashi in this visual novel. You’ll stumble upon an ancient curse and must race againts time to hunt for the Queen Leyak’s Necronomicon. END_OF_DOCUMENT_TOKEN_TO_BE_REPLACED

END_OF_DOCUMENT_TOKEN_TO_BE_REPLACED 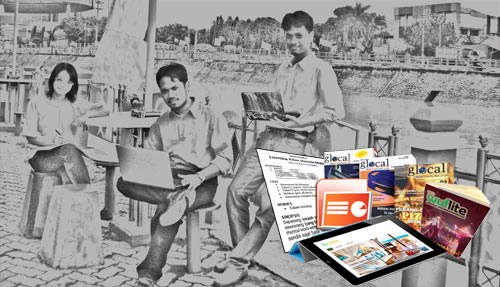