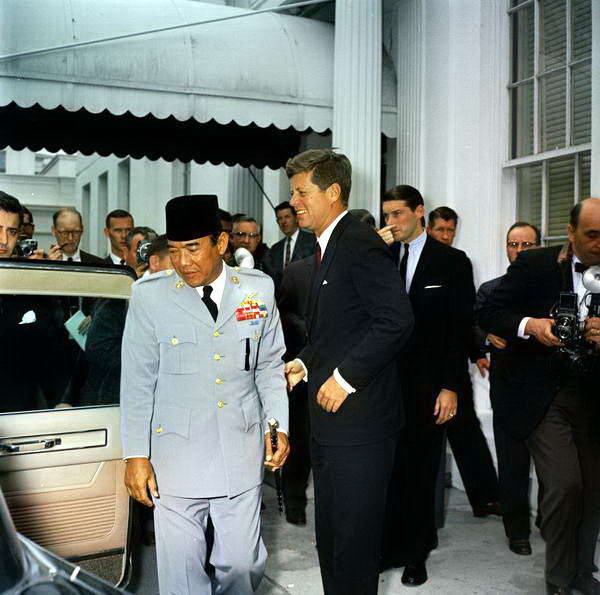 Soekarno (and his peci) with John F. Kennedy. Photo from puramoz.blogspot.com

My father-in-law always prays in mosque. Every time he goes, he wears a black peci, a small hat as you can see in the picture. It makes my daughter Kiara wanted it too. So with her little body and short hands, she looked like Unyil, the main figure of one puppet show in Indonesia when wearing her grandfather’s peci. I couldn’t stop laughing see that peci covered half of Kiara’s head.

Peci, ladies and gentlemen, is a common hat in Indonesia. Although, men in Brunei, Malaysia, Singapore, and even southern Philippines and Thailand, also wear it. With its truncated cone shape and usually made of embroided felt, black cotton or velvet, peci is also worn in formal occasion like in Islamic wedding feats by bridegroom, or in religion celebration like Eid ul-Fitr and Eid ul-Adha.

That’s why, peci is associated with Islam. But of course, that’s not perfectly correct. In Malaysia and the Philippines, maybe it is. But in Indonesia, peci is also a national headdress for men. It is popularized by Sukarno, the first president of Indonesia. He wore it in every protocols and international meetings.

The tradition of wearing black peci continues. All Indonesian male presidents wear it as important part of their official presidential uniform. So do their vice presidents and ministers. Not only the high officials, the Paskibraka or Pasukan Pengibar Bendera Pusaka (the Flag Raising Team) wear black peci too with a small Garuda broche. Even the boys and girls share the same peci. Although the shape is a bit different with any common black peci.

It’s a very famous traditional fashion in Indonesia. Unfortunately, the users usually are the old men, I mean 50 year old or above. You would rarely see Indonesian the youngsters wear peci in daily life. They prefer modern hats. Maybe it’s because they believe that peci can make them looks older.

Well, I think that depends on the user’s behavior. If you dress up well, behave well, and talk articulately, peci can even enhance your charisma. Looks presidential, maybe 🙂

Anyway, peci is also known as songkok (in Malay cultural-based ethnics in Malay peninsula, Sumatra and coastal Borneo) and kopiah or kopeah (in Java and Madura Island). While the name “peci” itself was probably derived from the Dutch “petje” that means “small hat”. Some say, it’s derived from the Turkish “fez”.

However, peci has become the identity of Indonesians. The world has recognized it. Some story icons like Unyil or Kabayan (the smart, funny figure in Sundanese folk) wears peci all the time, not only for praying.

You know, in daily life, some people wear peci only when they pray. For muslim, peci is like a veil for man. He cannot do any bad things while wearing peci. Because it’s part of their religious identity. For the same reason, the accuseds in the court used to wear peci to give the innocent look. Oh là là, this is where peci is misused.