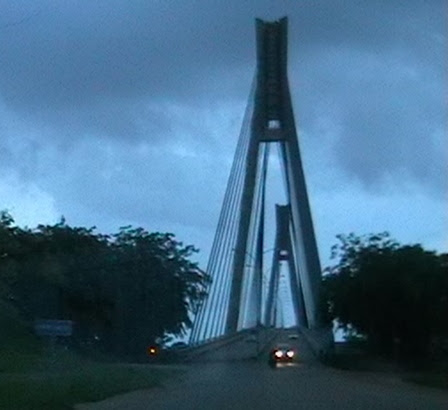 Don’t say you’ve ever traveled to Batam if you did not visit Jembatan Barelang (Bridge) yet. We call this bridge Barelang because it connects Batam Island (BA), Rempang island (RE), Galang island (LANG), and others small islands in the path. “Hey, why don’t you bring me there this afternoon?” I asked my friend who had been living in Nagoya (Batam Island) for one year.

He had never visited Barelang either, so he gave me a “why not” nod.

From Nagoya, We Drive to Jembatan Barelang

After the office hour, we went. It takes about 30 minutes from Nagoya to Barelang. That means we reached there at 17:30. Although Batam’s sun doesn’t set yet at the time, unlike in Java island, we needed to rush.

I wanted to record Barelang and the islands. In other hand, my camcorder has no lighting stuff, even the internal lighting. There is only a Night View feature, which count on a shutter (the photography savvy must be know how “lazy” the picture produced by this technique).

So this is a “chasing the sun” mission. What can I say, the following day I must have flied already to Surabaya. 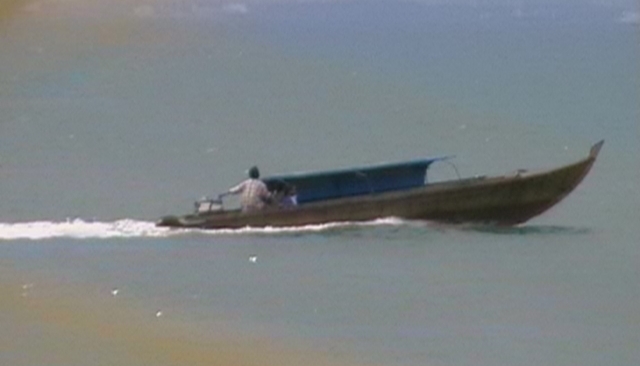 Look at that fisherman, his boats sometimes went back and forth below this 2,262 meters bridge.

Generally, we enjoyed the panorama in Barelang Bridge. The scenery between two island was also an exotic enchantment. This is one of the tourism gates of Southeast Asia.

And not only the tourists who have visited Barelang, the Batam citizen itself visit it, particularly the adolescents who has smitten of love. Yeah, the clean blue sea underneath the bridge can make you feel mellow.

“I should come along with a girl, rather than you,” uttered my friend.

Hahahaha, damn! I was to say the same thing to him.

The day seemed to grow darken so quickly. So, we continued driving. Till the end of the bridge, as our initial plan. The furthest reaches of Galang Baru island is 60 kilometers from Batam.

If, let’s say, we keep the velocity for 60 kilometers per hour constantly, we need one hour to get there. That means later than 18.30. The sun will have been set off. Then my camcorder will be useless, just being able to catch a black air by that moment.

Thus in the middle of Rempang Island we decided to turn around. But if we continued the trip, the island’s order would be Batam, Tonton, Nipah, Setokok, Rempang, Galang and Galang Baru. Following by Malacca straits, of course.

As far as I saw, there was nothing I consider special. Just the red field as mostly you’ll found in Batam island. The illegal houses stood in very simple way, without neighbor in tens or hundreds meters. The bases of trees leftover from the chop downs. A rug of land scrapped for bauxite ore mining.

The government is going to build those islands with industrial approach, like Batam who’s trying to imitate Singapore. A little Singapore, they said. I don’t know whether this is a good idea or just the opposite.

Another rumor, I’ve heard the plan to make one of them into a cemetery island. Wow, that’s going to be spooky. Anyway, in 1975-1996 (for 21 years) the refugees from Vietnam have been dwelling Galang Island. So, there is generations who was born and died there already. But, that’s another story.

Back to Barelang. I’ve just known, when the sun completely fades away, Barelang is getting fascinate with the lamps all along the suspension bridge. But if while ago we were driving as in the toll road (or F1 track?), this time we have to be more careful. It was quiet dark. 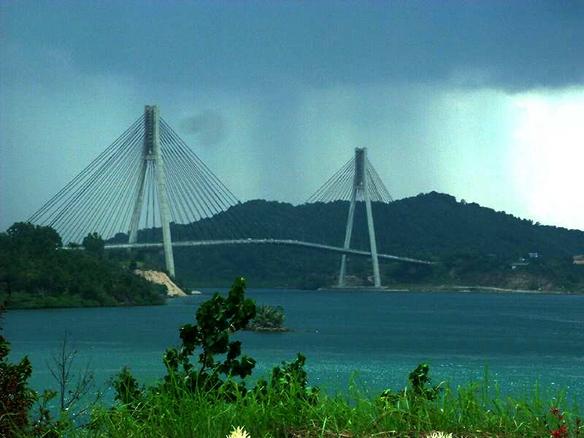 5 thoughts on “Barelang Bridge, the Icon of Batam”