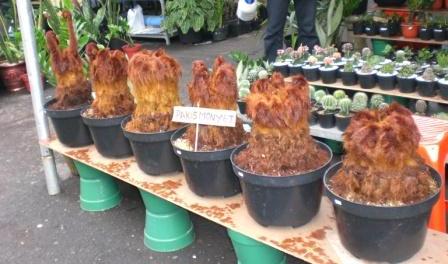 At first glance, what did you see in picture beside? A line of monkeys, maybe. But these are not real monkeys. These are sort of plants from Sumatra, which has a body texture like monkey’s fur. That’s why we call it Monkey Fur (or Bulu Monyet in Indonesian). Actually, it’s more like orangutan.

However, we never met these plants outside the jungle of Sumatra, one of Indonesian islands.

According to Rizal, a collector of Monkey Furs, in every flora exhibitions held recently, Monkey Fur has been always caught the visitor’s eyes. Nevertheless, it was (just) second prima donna after anthurium.

“Monkey Fur’s trend is maybe because of the press too,” he said.

Rizal is right. Up till now, the media is one of the main trend catalysts, indeed. Looking back the past, prices of adenium, anthurium, et cetera have increased in Indonesia since media had often blown them up.

And now, Monkey Fur suddenly appears in front of us. 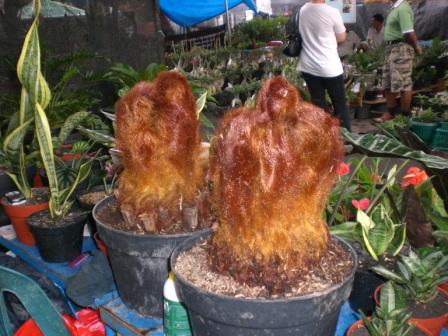 As other decorating plants, we can mold Monkey Fur’s trunk to whatever we desire; monkey’s face, dog, cat, even human. Just, “If we mold it to human face, the result might be approximating a prehistoric human,” said this ‘crown prince’ of Prie Nursery, joking.

Molding a Monkey Fur takes only a little time. “Before a year, we could shape it as we want,” explained Saifuddin, the owner of Bunga Karya Alam plants house at Leduk, Tretes (Pasuruan City). He added that prices of Monkey Fur are relatively cheap, between 150,000 to 200,000 IDR (1 US$ now is about 9,700 IDR).

“But if the plants has already shaped uniquely, like has a form of animal, its price usually boosted up to 700,000 IDR.” Interesting anyone?

7 thoughts on “Adorn Your Garden with These Monkeys”