Like any other big cities in Indonesia, Semarang is also a melting pot. A lot of cultures, including religions, inside. When my husband, daughter and I had a holiday there recently, we visited some religion sites. They are masjid (mosque), gereja (church), klenteng (Shenism temple), and other religion places. This is a brief, rush note of that journey. 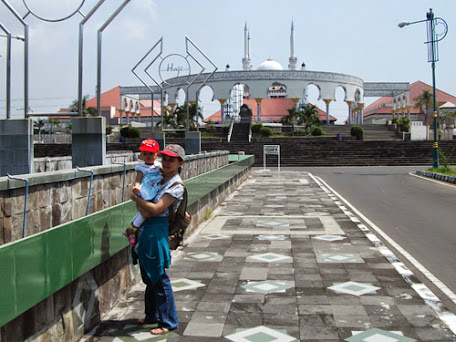 Me and Kiara at Great Mosque of Central Java. Photo by Brahm.

Located at Gajah Raya Street, district of Sambirejo, subdistrict of Gayamsari, this mosque is 10 hectares wide, and the building alone is 7,669 m2. People say, it has architecture in between Javanese and Greek style. I agree. Look at the exterior look there.

The Mosque of Central Java was commenced to build on Friday, September 6th 2002. Four years later, on November 14th 2006, it was inaugurated by Susilo Bambang Yudhoyono President of Republic of Indonesia. But actually, since Friday, Marh 19th 2004, muslim citizens have already used this mosque effectively.

Mosque of Layur a.k.a. Menara Kampung

It is called “Kampoong Melayu” because since 1743, this location was the domicile of malay people. This place was where the ships and boats were tethered. The arabians then decided to stay here. By the way, the additional tower at front makes this mosque also called Masjid Menara (The Tower Mosque).

Want to visit Mosque of Layur? If you are in Pasar Johar (Johar Marketplace), go towards Kota Lama (The Old City of Semarang) by the big post office at Pemuda Street. Before Berok Bridge, turn left. Don’t worry. Although it is one of ancient buildings in Semarang, very old building, it’s safe. It still be used for daily devout.

It is located in the region established by Kyai Ageng Pandan Arang. When he moved to Semarang, at Bubakan Regency, he built a mosque as a place to pray. At the time, this mosque was the biggest in Semarang. Some say, Kyai Adipati Surohadimenggola II is its founder.

It stands five minutes walking from our Pandanaran Hotel. To be precise, the mosque is located at 126 Pandanaran Street. The Great Mosque of Baiturrahman was inaugurated by President Soeharto on December 15th 1974. It was started to build on August 10th 1968. The building has pyramid shape and was established on the area of 11,765 m2 wide.

Nowadays, Great Mosque of Baiturrahman has functions not only as place for praying and gathering of Islamic community, but also as a center of Islamic campaign. In the complex of Baiturrahman, there are also developed education institute, kindergarten and elementary school H. Isriati. It’s religiousity oasis in the middle of capitalism surroundings, such as malls and office buildings.

In 1937, the church was restored and expanded. And then on August 9th 1940, Gereja St. Perawan Maria Ratu Rosario Suci became a cathedral. Its complex consists of main cathedral area, meeting room, and school. In 2012, an official residence and an office were built for bishop, where there are a room of chapel, archive, secretariat, park, public meeting room, and six rooms for housing. 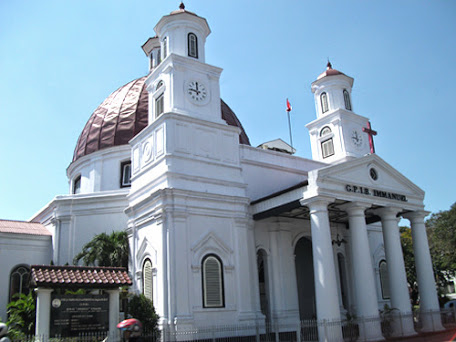 Blenduk Church is in The Old City area. Photo by Brahm.

Located at 32 Letjend Suprato Street, this church was built in 1753. It is different with another buildings in The Old City that generally fence the road and stick out the shape, this neo-classic building looks contrast. The shape is stuck out, make it recognizable.

Blenduk Church now is a cupped handful building with single facade, that is vertically devided into three parts. There are two floors. This church is still used for religious activities in Sunday and certain days. As when we visited Blenduk Church on Friday, we could not get in. Because, “There is a ceremony inside,” said a security officer.

Located at Ronggowarsito Street, Gedangan Church was built since 1809. Although it is wiped frequently by the flood, this building still stands sturdy. Even the disaster became a blessing in disguised, regarding the floor looks shiner after it was several times being cleaned from those floods.

By the way, Gedangan Church is also called Red Church. Obviously because of the appearance. The walls are made from red bricks.

Let’s move to the holy place of Chinese folk religions (Shenism) now. We’ve got some temples too in Semarang. One of them is Klenteng Tay Kak Sie. It’s located at 62 Gang Lombok Street, in a China Town area.

Tay Kak Sie Temple is the old building established in 1746. In the beginning, the temple was built only for worshipping Kwan Sie Im Po Sat (Goddess of Mercy). But then, it becomes the temple that worships also the other Tao’s God and Goddess.

It is located around Simongan Region, in south-west Semarang. Sam Po Kong Temple is the ex-transit and landing port of an islamic Chinese admiral, Zheng He a.k.a. Cheng Ho. This place also called The Stone Building, why? Because of the shape. Take a glance, it’s a big stone cave on the stone hill.

Due to some misunderstanding, Indonesian people of Chinese descent thought that the red building was a (character of) Shenism temples. So until today, the Sam Poo Kong is made into the place for worshipping, praying, and treated as a sacred place for Shenism followers. It is completed with the altar and some Sam Po Tay Djien statues. Whereas, Admiral Cheng Ho was a muslim until his death. 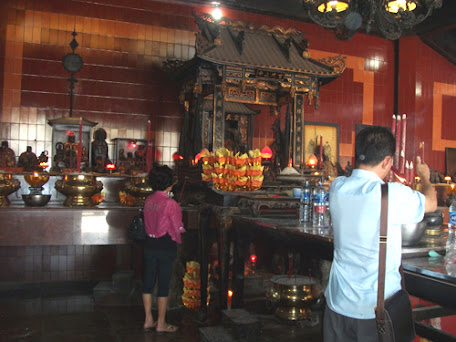 Located at 203 Grajen Karanglo Street, Jagalan area. Grajen Temple is known as Drug Temple. People believes it can heal any kind of sickness. The believers seem never stop to come here to pray, ask for blessing, recovery from the pain, or relief from bad influence. We felt the ambiance, so oriental, when we came here.

It is located in Marina Complex, right in front of Royal Family Residence. This Vihara was built from 2001 on the area of 1,688 hectares. Mahavira Graha is the biggest vihara in Central Java. It consists of seven floors, has 88 Buddha statues in the position of abayamudra and 32 statues of Avalokitesvara (Kwan Im).

Vihara Mahavira Graha is not only a site for praying, but also an education center for the Buddhist monk candidates from Mahayana. So actually, this is not a tourism attraction. But non-Buddhist tourists can still enter and look around, as long as they respect the ethics and rules inside.

Avalokitesvara Pagoda in Vihara Buddhagaya Watugong is 45 meters high, with seven floors. Almost all the construction is made of concrete and uses mostly red as the background. It’s decorated by some statues in every floor. MURI or Indonesian Record Museum has awarded Pagoda Avalokitesvara Buddhagaya as the highest pagoda in Indonesia.

There are also two big gazebos flank in right and left, that is used as the place for ceremony drum and great bell, one of pagoda tradition complement. Avalokitesvara Pagoda is also known as Metakaruna Pagoda or Pagoda of Love because of its existence to respect Kwan Sie Im Po Sat. In total, there are 30 statues in this pagoda.

I think that’s all. Now, have you decided where to go when you’re in Semarang one day?

3 Replies to “Tour of Religion in Semarang”