Jejen Rice is one of Madura’s servings that originates Pamekasan. This food is quite popular there. The one who has tasted it become addicted, and who hasn’t must be in curious. Whereas, from the way it served, Jejen Rice is pretty similar with Javanese mix rice. What makes it different, then? END_OF_DOCUMENT_TOKEN_TO_BE_REPLACED

About 16 kilometers away from the Arc de Triomphe, I met his “twin” in Indonesia. The building is also located at the five-way intersection, which lead us to Pare, Kediri (the city), Plosoklaten, Wates (Pesantren), and Menang. It’s called Simpang Lima Gumul, in Ngasem Subdistrict, just half an hour land trip from Kampung Inggris in Pare.

At a glance, Simpang Lima Gumul looks similar to L’Arc de Triomphe. But take it closer, you’ll see the engraving on the wall depicting Indonesian countryside, farmers, agriculture, and other. On all four sides of the monument there are statues of Ganesha, the symbol of Kediri. Meanwhile, Simpang Lima Gumul is 804 square meters, 25 meters high, and propped by the three ladders. You know what, it shows exactly the anniversary of Kediri Regency: March 25th, 804.

View from the top of the Monument

The water park provides you a collection of amusing vehicles like you find in WBL, such as speed slides, body slides, mushroom pool, fun boomerang, spilled tub pond, flying fox, etc. Not to mention standard amenities like toilet, food court, little mosque, lockers, giftmart, spacious parking lot, and so forth.

Brief, “Arc de Triomphe” in Paris… err, I mean Pare, is not to be missed. If you wish to travel to Paris or just miss Paris, you should visit Simpang Lima Gumul. And I suggest you to come after the sunset. So you can enjoy the nuance while seeing les étoiles (the stars) in the sky. [photos form KediriKab.go.id]

Written by Moch. Yusuf, The Course Coordinator for Kampung Inggris. You may like his other articles about Kediri:

END_OF_DOCUMENT_TOKEN_TO_BE_REPLACED

I am not a citizen of Pare, Kediri. But sometimes for my business (Kampung Inggris) or familial trip, I have to visit this lovable town. Then, I found these unique food and beverage. END_OF_DOCUMENT_TOKEN_TO_BE_REPLACED 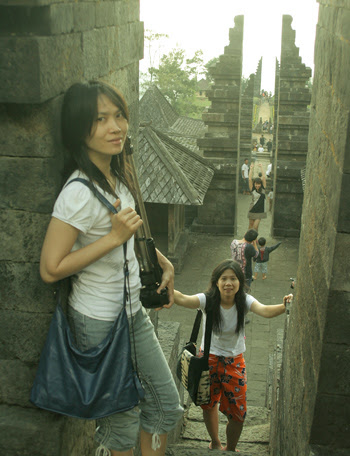 In Javanese, cetho means clear. Hence, Cetho Temple or Candi Cetho could be a perfect place for travelers who are looking for clarity deep in their heart. Cetho is one of the respected Hindu temples in Indonesia. It has been built since the end of Majapahit era in 15th century. END_OF_DOCUMENT_TOKEN_TO_BE_REPLACED